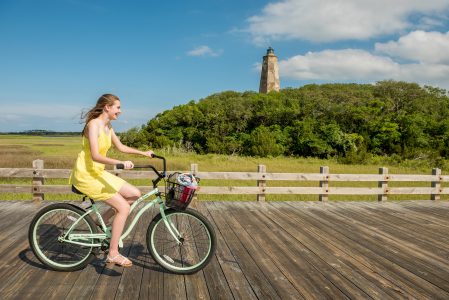 Picture yourself in the most stunning and iconic spots on Bald Head Island. Literally.

We’ve compiled our top ten most selfie-worthy locations for you, but there are others around every corner. Check out these and add your own. We’d love to see your shots, so please share them on social media using the hashtag: #bhiselfie. You’re sure to rack up the likes, starting with ours.

The best long view of the 1817 sentinel is from the bridge that crosses the marsh near the marina. Pose along the railing and get both the stately structure and the majestic marsh in the background. If you’d rather get the up-close-and-personal angle, stand right in front of the lighthouse holding the camera low to capture her height.

It’s not easy to capture the beauty of this geographic phenomenon. Stand ankle deep at the point where the ocean rolls in from two different directions. Be aware of the tide and the sea spray, and try taking shots at various times of the day. The position of the point, as well as the dramatic lighting, will shift considerably as the hours pass.

Park your golf cart or bike at the entrance to the trail and take a very short hike to visit one of the island’s oldest residents. Estimated to be several hundred years old, the Timmons Oak has a large hollow area at its base, making for a cozy spot to tuck inside for a unique photo setting.

Talk about making a great first impression. The Bald Head Island Harbor is extremely photogenic, from the entrance to the marina to the boats bobbing in their slips. Take a selfie just as the ferry is arriving, with its flags flying and passengers waving. Or get a group together for a pic in front of the giant BHI emblem at the marina entrance.

The Common at Cape Fear Station

It’s a sprawling public green at the east end of the island, anchoring the signature neighborhoods of Cape Fear Station and its Southern Living Inspired Community. There are numerous spots here worthy of posting, including in the gazebo and on top of the tower. Or just spread out a picnic blanket and capture your toast to simple pleasures.

The north side of Bald Head Island is comprised largely of a vast salt marsh with serpentine creeks winding through golden grasses. Consider a selfie in a kayak or, if you’re especially sure-footed, on a standup paddleboard. If you prefer terra firma, walk out on the long pier that extends from the M. Kent Mitchell Nature Trail. You can get a gorgeous shot in almost any direction.

If you’re a golfer, be sure to pose at the tee box of the 16th hole, the most picturesque of all. Capture the course and the ocean in the background, all in one shot. Not a golfer? Not to worry. You can still stop along Stede Bonnet Wynd and snap a shot with the fairway in the background.

A cozy canopy of ancient trees creates a tunnel-like passageway down a long stretch of Federal Road, the island’s main interior byway. The opening at the end of the road feels very much like the light at the end of a tunnel. It’s not the easiest shot to capture, but when you do, it’s magical.

The new aquatics park at the BHI Club is impressive. There are so many places to play in the water, including fountains that shoot into the air. That backdrop will convey the fun, but you’ll want a water-resistant camera to be safe.

Once you have taken a picture at the point of Cape Fear, go on up to the Shoals Club, provided you are a member or temporary member. The gazebo on the East Beach side of the club frames a spectacular, elevated view of the ocean, including the point. It’s simply picture perfect.

So, are you ready for your close up? These iconic places on Bald Head Island are so spectacular, no one will have to tell you to smile!

Tour available homes, explore the neighborhoods, and experience everything Bald Head Island has to offer.

Let us know which property interests you and a member of our team will reach out with more information.