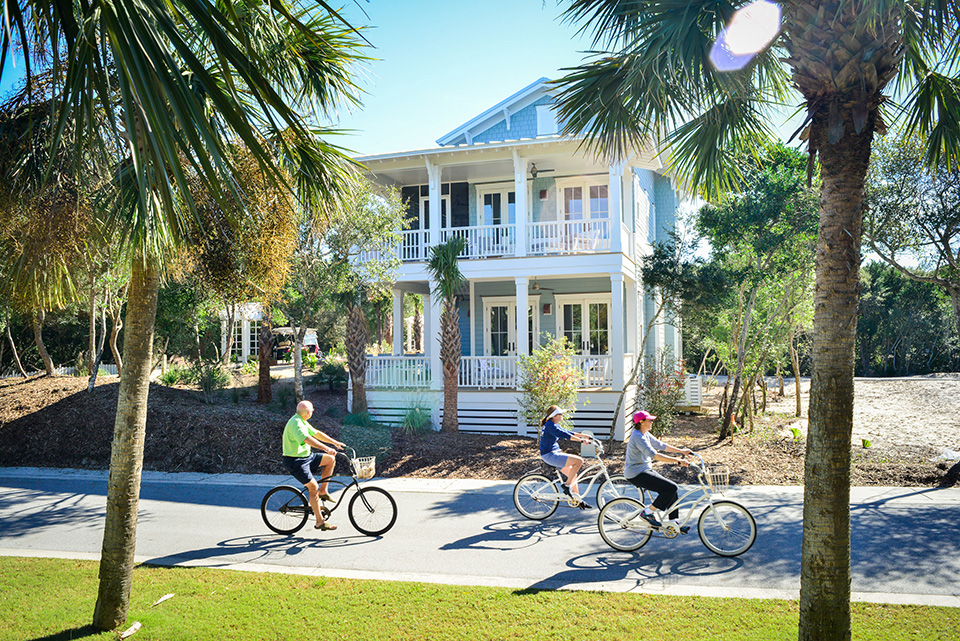 When Southern Living magazine hand-selects candidates for their Inspired Communities designation, they consider the following: Does it embrace the natural beauty of the southern landscape? Does it display the best of Southern Living Inspired architecture? Does it create environments that foster gatherings, interactions and celebrations?

On the eastern end of Bald Head Island, in an esteemed community known as Cape Fear Station, they have answered an emphatic yes to each of these questions. Recently, the first home in this Southern Living Inspired Community opened for public tours.

Standing in the living room of the showpiece residence she helped create, interior designer Vicky Serany wistfully imagines its future. As stunning as it is, she doesn’t picture its residents treating it with kid gloves. Instead, she joyfully describes children coming in off the beach with sandy feet and wet swimsuits, dogs bounding in from the yard, and guests helping themselves to drinks and snacks around the center island.

“It’s the philosophy of second home design,” she explains. “Rest and relaxation, kids and pets—you mix it all in and maximize your time there together. That’s the thing about second homes: you know you are making memories. It’s a chance to focus on what is important.”

Vicky is adamant that, for a vacation home, carefree maintenance is key. “Everything in the house is super durable, basically indestructible.” You’ll find Sunbrella fabrics on the furnishings and shower curtains, quartz countertops in the kitchen, and distressed woods on the floors that only become more attractive with wear. “You can design a beautiful space,” she emphasizes, “but if it doesn’t function well, it’s useless.” Serany’s company, Southern Studio Interior Design, was part of the team that, along with Bald Head Island Limited, Allison Ramsey Architects and Whitney Blair Custom Homes, brought the home from conception to completion.

THE BEAUTY OF COLLABORATION

“There was a pervasive sense of excitement and energy around working with Southern Living, as well as the other partners,” says Jim Henry, Director of Development and Construction for Bald Head Island Limited, LLC. “The Southern Living Inspired Community both fits beautifully into the already established Cape Fear Station neighborhood, and stands on its own as a micro-environment within it. For this home, Allison Ramsey took the traditional, Low Country language that is its signature, and painted it with the Bald Head Island aesthetic that we have established here over 30 years.”

“It all starts with great architecture,” agrees Serany. “Less embellishment is needed when you have great design. When you have that, magic can happen.”

Jeff Sanderson, president and founder of Whitney Blair Custom Homes, expresses a sense of total satisfaction with the home, the first his company has built on Bald Head Island. Whitney Blair is part of the Southern Living Custom Builder Program and is a two-time Southern Living Builder of the Year award winner, most recently in 2015.

Looking to articulate what makes the home so special, Sanderson points to the overall sense of scale, proportion and balance. The 10-foot ceilings and eight-foot doors, for example, are pivotal to the interior’s beauty and comfort. “When proper scale and proportion are achieved,” he says, “people automatically find it aesthetically pleasing and feel comfortable in the space.”

Sanderson also speaks to the practicality of the home. “It’s easy to get good design and a beautiful home with an open checkbook,” he says. “The challenge is doing so on a budget.” Sanderson credits the collaborative process for bringing out creative solutions. As a result, he says, “The home stands as something that is attainable and an inspiration for good architecture and design. It shows what is possible.”

A FRESH TAKE ON TRADITIONAL

The design of the home blends traditional coastal elements with sleek, modern details. For example, strategically placed shiplap siding on the walls adds texture, giving a nautical, coastal look without being cliché, while clean lines and up-to-date materials bring a fresh flair throughout the home.

The four-bedroom, three-and-a-half bath home essentially has two master suites, one downstairs and the other upstairs. “It’s interesting to hear people who tour the home talk about which they would choose for their master,” says Serany. “Each appeals for a different reason.”

The downstairs master has a custom bed built into an arched alcove and a luxurious bathroom that features sleek details, natural materials, and an unexpected second shower that is outdoors, but only accessible through the inside.

At the opposite end of the house, the upstairs master opens onto a wide porch overlooking The Common, a village green at the center of Cape Fear Station. Looking out on the tops of oaks, cedars and palms, it gives a lofty tree-house effect to the suite.

But according to Sanderson, the space most likely to be fought over is the sleeping porch, a screened area with a custom-made bed suspended from ropes. Those who might be torn between, say, watching a Saturday afternoon football game on TV or being outside on a beautiful day, no longer have to choose: This private retreat has a wall-mounted flat-screen television that lets you indulge in both at the same time.

The sleeping porch is indicative of a common theme throughout the house: blurring the lines between the inside and out. Two walls in the living room are made up primarily of French doors that open to a wraparound porch, expanding the living spaces exponentially.

Subtle details, too, play with the inside-out juxtaposition, including the use of driftwood as a landscaping element that is carried inside with well-placed touches throughout.

“Bald Head Island is truly special,” explains Serany, “and design should be true to the place. The island values good design and honors nature.” To this end, Serany’s team also used the natural surroundings as inspiration for the muted palette. The colors are primarily warm grays and fresh white, with sea glass tints for added interest.

Homage is paid to the island’s historic significance, as well, especially as the location of an early United States Lifesaving Service Station, after which the community of Cape Fear Station was named. Archival photographs from the era are framed and placed throughout the home, including a grouping on the stairwell wall.

AT HOME IN ITS ENVIRONMENT

In calling out the special features of the home, Henry calls attention to the community’s enviable location on the island: just minutes by foot, bicycle or golf cart to East Beach, South Beach, and the Shoals Club at The Point of Cape Fear. “What has been accomplished here is impressive,” he says. “You have the beautiful homes and amazing amenities, yet you still feel like it’s the ends of the earth. You get to engage in the social surroundings, then retreat to your respite in the woods.”

The home’s family-friendly, open floor plan is also appropriate on Bald Head Island, he says. The atmosphere—both on the island and in the home—promotes a sense of community, a place for gathering with family and friends.

The home, and the greater community, seem to issue a standing invitation: Come on in and make yourself at home.

Tour available homes, explore the neighborhoods, and experience everything Bald Head Island has to offer.

Let us know which property interests you and a member of our team will reach out with more information.